Created by Elzie Crisler Segar to first appear in the 1929 Thimble Theatre daily comic, Popeye the Sailor is best known for his appearances in media outside of video games and is often labeled as one of the most iconic comic and cartoon characters to ever exist. His antics often see himself downing a can of spinach to protect his girlfriend, Olive Oyl, from the likes of the brutish Bluto, terrible Sea Hag, and other notable antagonists. Very nearly 90 years later, he still appears in an ongoing comic strip and stands alongside characters like Mickey Mouse, Bugs Bunny, and Betty Boop as some of the most popular and iconic characters to be introduced in any modern medium.

Despite this, Popeye also has a notably rich history in video games, mostly thanks to the efforts of Nintendo and Shigeru Miyamoto. Miyamoto intended for the first Donkey Kong title on NES to be a Popeye title, and although that idea was scrapped, Popeye still wrangled his own effort on the device a year later. This was preceded by Game & Watch and arcade versions of the title also spearheaded by Nintendo developers and succeeded by a broad collection of titles ranging from further appearances on the Famicom all the way to 2005's GBA entry, Popeye: Rush for Spinach. In Jonno's Smashtopia, Popeye adopts a moveset indicative both of his many video game appearances alongside his more legendary spots in comic books and on the silver and bronze screens. Full of bravado, Popeye will proudly taunt his opponents when he lands a heavy hit, perhaps making Incineroar his natural rival on the Smash roster.

Popeye rides onto the stage aboard his original ship, the Olive, alongside his friends Olive Oyl, Castor Oyl, Swee'Pea, and J. Wellington Wimpy. They wave goodbye to Popeye and wish him luck as they ferry the ship back from whence it came. A small output of waves naturally surround the Olive as it makes its way into the fray.

Up Taunt: Popeye looks towards the camera with a smile, winking at the player and giving them a thumbs-up.

Down Taunt: Popeye crosses his arms and shakes his head in disapproval, down-talking his opponents as he says, "I oughta busk you right in the mush."

Side Taunt: Popeye flexes his arm while lifting up his sleeve, scowling.

Wham!: Popeye sets one hand atop his dominant arm as he begins to swing it rampantly, revving up for a great punch just like in his source material. Functionally, the move works in a way very much akin to Donkey Kong's standard special. Players hold down the special attack button in order to charge up Popeye's punch. The longer the charge, the stronger the punch, dealing more damage and knockback as he sends his enlarged, cartoony fist flying in the direction of his foes. He is also capable of holding a charge for a number of seconds. Unlike DK, the direction of Popeye's punch can be slightly altered depending on how players tilt the control stick in the milliseconds leading up to their unleashing the attack. If a fully charged version of the punch lands on an opponent, the camera will zoom in towards Popeye for a split second as he lands a critical hit, comical "WHAM!" text appearing above their heads as they flinch out of shock.

Boff!: Popeye unleashes another harrowing punch in the way of his enemies. Quickly winding up, Popeye throws a normal-sized fist forward which. Unlike with Wham!, the move cannot be charged, nor can its direction be altered. The tradeoff is, however, that if he makes contact with an opponent, he'll bust their gut, stunning them for a brief moment. If an opponent makes contact with the attack's sweetspot, Popeye will succeed in briefly exasperating them to a greater extent, similar to how Ryu or Ken's down special affects their foes. There will be a minor lag preceding the attack as Popeye winds up, during which time he maintains several frames of super armor. Additionally, if the attack makes its sweetspot with an opponent, there's a chance that a comical "Boff!" bubble will appear over the assailed.

Lifesaver: Popeye retrieves a lifesaver tied to a rope and tosses it several feet above his head, about four Pits in length. It makes for an odd recovery akin to Ivysaur's, given its nature more as a tether than an inherently rising arc. When thrown from off stage, the lifesaver will connect with a platform and remain in place, offering Popeye a means to then quickly climb the rope and return to the fray. The lifesaver is also capable of dealing relatively decent knockback and damage as a meteor smash if it slams into an opponent on the way up, although what balances the move beyond its two-step recovery process is Popeye's opponents' ability to pop it if they dish enough of a beating to it before he returns to the stage.

Catch!: In a callback to their Game & Watch appearance, an unseen Olive Oyl and will toss one of three items to Popeye from off-stage: a glass bottle, pineapple, or empty spinach can. As she lobs it forward, the item will slow down in time for a brief moment so as to give Popeye another opportunity to press the special attack button again. If it's done, his fist will make contact with the item and it will go flying forward. Each item maintains separate properties from the other, including different agencies for damage and knockback output. While the glass bottle won't dish out much knockback, its cutting effect will offer ample opportunity for opponents to flinch. The pineapple, meanwhile, will deal higher knockback while traveling a bit slower with its burlier disposition. There is a chance that, when the pineapple makes contact with an opponent, it'll burst open, producing edible pineapple slices. If the pineapple doesn't make contact with an opponent, it may also become a whole edible pineapple. The spinach can, in signature Popeye fashion, will incredulously deal the most damage and knockback as Popeye gives it an extra dash of inspired power in his punch. It might endure the punch as well, at which point it can be used by anyone as it falls onto the stage. If Popeye opts not to immediately punch them away, the items will simply arrive on-stage and can be tossed, attacked, or otherwise eaten by anyone. Only two of these items can be on-stage at a time.

Can O' Spinach: Olive Oyl appears on stage, flailing towards Popeye from five or six Kirbys in front of him. If she makes contact with any opponents on the way there, they will be caught in a cutscene sequence wherein she hands Popeye a full can of spinach, exclaiming, "Here, Popeye!" He then retrieves a can opener from out of his shirt to pop open the can and immediately down its contents. Emboldened by his newfound strength, Popeye smirks as he struts towards his opponents. As they look on in shock and fear, some covering their faces, Popeye swiftly charges up a tremendous slammer of a punch, sending them whirling into the air. Once the cinematic is over, Popeye will return to his standard fighting form as he sees he has, indeed, sent his foes flying. Throughout the cinematic, whatever background music is playing will be greatly lessened in volume as a brief jingle version of Popeye's theme song joyfully plays.

Anchor: Popeye lifts a hefty anchor up from the ether, proving his strength as his arms inflate, holding the item up from both sides of its curved bottom weight. If the player simply lets go of the Extra Skill button at this point, Popeye will drop the anchor onto the stage and take a quick moment to recuperate, wiping his brow of sweat and exaggeratedly huffing. The anchor can be picked up by any fighter and thrown at this point, although only Popeye will prove to have the strength to carry it in one hand as he hops around the stage; all other fighters sans Donkey Kong will have an issue carrying it more like Bonsly, in two hands as they walk much more slowly and lose their ability to jump. In Donkey Kong's case, he will carry it as he does Barrels and Crates, with his jump still inhibited.

Still, the anchor produces heavy damage and knockback no matter how it's thrown. Whether the Extra Skill button is held when Popeye procures the anchor or if Popeye retrieves the anchor once it falls and it's held then, he will proceed to swing in 360 degree motions with the anchor in his hands. Damage can be dished out as Popeye makes his whirlwind movement, although the real spectacle comes when the input is let go again and Popeye lets the anchor go whirling through the air. If it makes contact with anyone then, expect it to hurt. Popeye will have to wait several seconds before summoning another anchor once the current one has been spent. 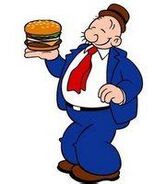 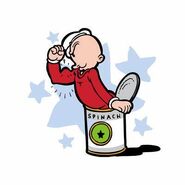 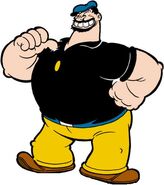