The super fighting robot Mega Man and creation of Dr. Light. He was originally designed to just be a lab assistance for Dr. Light, but when Dr. Wily re-programmed several of Dr. Light’s industrial robots to take over the world Dr. Light knew that something had to be done. Mega Man was converted into a combat robot leaving his sister Roll behind as Dr. Light’s assistant. Mega Man hunted down each of Dr. Wily’s Robot Masters and with each one defeated he gained a new power associated with them before finally encountering Dr. Wily and taking him out. Though there have been times where Dr. Wily has put on a friendly face and sworn that he’s reformed, he always seems to go back to his evil ways leaving it up to Mega Man to save the day once again.

Mega Man will warp onto the stage like when starting a new stage in Mega Man.

Kirby will wear Mega Man’s helmet on his head.

Up Taunt: Mega Man will extend one hand forward and transform it into his Mega Buster before pumping it into the air.

Down Taunt: Mega Man will warp away on the spot and return after the briefest of moments like his teleporting animation. Despite seemingly being gone from the stage, this cannot be used to dodge attacks.

Side Taunt: Mega Man will turn his back to the camera and look back behind him and smile.

Metal Blade: Depending on where the control stick is pointed Mega Man is able to throw a Metal Blade in any one of 8 directions. The Metal Blade doesn’t deal a lot of damage when it hits a player but it does have the capability to break some items like Barrels. If the Metal Blade is thrown into a part of the stage it will stick there for a short bit which gives any other player the chance to pick up the Metal Blade and use it as an item. Curiously, throwing the Metal Blade as an item deals more damage than when it is thrown normally.

Crash Bomber: Mega Man will fire off a bomb that when it makes contact with a player or the stage will drill into them and attach itself in place. After a few seconds this bomb will explode dealing damage. Much like the Gooey Bomb item, if a player that has the Crash Bomb attached into them runs into another player, the Crash Bomb will attach to this new victim and explode on them instead if they can’t give the bomb to someone else.

Rush Coil: Mega Man’s loyal robot dog companion Rush will appear in front of him as Mega Man jumps on his back causes the spring to activate which sends Mega Man flying up into the air. Mega Man can bounce off of Rush a second time if desired which will cause him to bounce up even higher than the first bounce. If other players get to Rush fast enough, they can jump off of him as well however Mega Man can not use this move while midair.

Leaf Shield: Four leaves will materialize around Mega Man spinning around him in a protective circle. These leaves can protect Mega Man from projectile attacks, but it will cause the leaves hit by the projectiles to be destroyed. Alternatively Mega Man can press the attack button again to send what leaves remain flying forward as a spinning projectile to damage opponents. If Mega Man runs at another player with the Leaf Shield active, just making contact with them will damage his opponent as the leaves swirl around him and slash his foes.

Mega Legends: This Final Smash will begin with Mega Man firing a short-range Black Hole Bomb in front of him. This attack has a small gravitational pull to it which can pull opponents in. If at least one opponent gets pulled into the Black Hole they will be taken to a cinematic where Mega Man will charge up his Mega Buster as other legends from the various Mega Man franchises (Mega Man X, Mega Man Volnutt, MegaMan.EXE, Geo Stelar, Proto Man, Bass, and Zero) will charge up their busters with him as they all fire different colored beams of energy that combine together to assault the foes trapped by the Black Hole Bomb which hits them for high damage and sends them flying back.

Chill Spike: Mega Man will fire a short-range projectile that when it reaches its max distance will hard drop to the ground. If this move hits an opponent directly there is a 70% chance they will be frozen by the attack. However if this move lands on a portion of the stage it will create a freezing spike trap that damage any players that run through it or land on it with a 10% chance of freezing them. 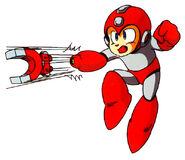 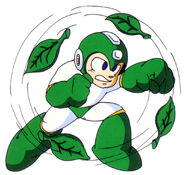 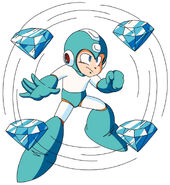 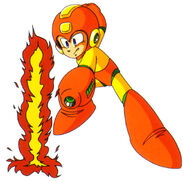 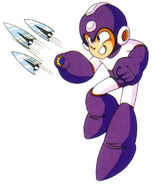