From constructor worker to plumber to hero of the Mushroom Kingdom to legendary gaming icon. Despite most of his days being spent rescuing Princess Peach from Bowser, and sometimes with his brother Luigi, Mario somehow still has the time to throw countless parties, go kart races, and countless sporting tournaments. The big question on everyone's mind though is why does he keep inviting the villains to all the fun?

A green warp pipe quickly sprout out from the stage for Mario to leap out of in his iconic pose shouting, “Let's a go!”

Up Taunt: Mario will face the screen by looking over his shoulders and will smile as he gives a thumbs up to the player.

Down Taunt: Mario will toss his cap around him as it turns into Cappy with an excited "Wahoo!" before he catches the hat and places it back on his head.

Side Taunt: Mario will jump and spin around in the air as if he were doing an aerial cartwheel before falling back down to the ground.

Fireball: Mario will fire out a single small fireball from his hand that will bounce along the ground for a short distance before disappearing. Deals minor damage and knock back.

Cape: Mario will quickly swing his cape from Super Mario World right in front of him. The cape deals minor damage to an opposing player on contact but can turn them around in the opposite direction that they were facing. Additionally it can be used to reflect projectiles if used with the right timing. In midair Mario will stall slightly as he uses the attack and will propel himself forward slightly as he swings the cape.

Super Jump Punch: Launching fast, Mario will do a quick rising uppercut into the air and if he was next to an enemy he'll carry them up with him knocking some classic Mushroom Kingdom coins right out of their body. Unfortunately the coins quickly disappear and don't actually do anything.

F.L.U.D.D.: Mario will pull out F.L.U.D.D. from Super Mario Sunshine and use it to blast water forwards. You can charge F.L.U.D.D. up to increase the amount of water Mario can dispense in one use of the attack. The water from this attack is primarily used to push other players away but unlike previous Smash titles it can now be used to damage opponents as well. The damage is minimal but you can maximize it by hitting an opponent with a fully charged F.L.U.D.D. at point-blank range. Additionally, as Mario unleashes the water you can angle the spray up and down.

Mario Finale: Mario will fire two large fireballs that zig and zag across the screen damaging any other player in their path and carrying them a distance forward as the fireballs make their way off the screen. The fire trail doesn't disappear immediately, but it does do so quickly. While it's still there though if a player tries to jump through the trail of fire they will be damaged as well.

Firebrand: Gifted to Mario by the Fire God of the Beanbean Kingdom, when Mario activates this skill his hands will take on a flaming aura that lasts for a short time. During this time, all melee attacks that Mario performs will deal additional fire-element damage. Even if the attack is using a melee item that hits with a different element. Mario's Special moves are affected as well but any attack that's not Mario directly hitting someone with his body or an item he's holding will not count. It works for Mario's Cape, but not his F.L.U.D.D.. It works when swinging a Beam Sword but not when firing the Super Scope.

Mario is able to Wall Jump. 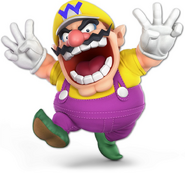 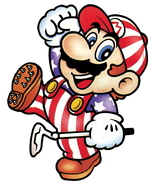 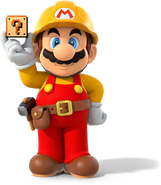 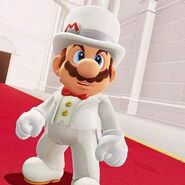