Makoto Naegi was randomly selected in a random lottery to enroll in the esteemed Hope’s Peak Academy, making him the Ultimate Lucky Student! However, he soon found himself trapped inside the school and forced to partake in exciting High School Killing Game, conducted by none other than the school’s headmaster, Monokuma! Using his deductive skills and evidence gathered from investigations, he served as the hope of his class by uncovering the ‘Blackened’ of several class trials and bringing down the mastermind of the game.

*Sorry to interrupt, but we have important news to share — turns out that Mr. Naegi was not the only Hope’s Peak student to receive an invitation! He will be joined by the following students:

*No case is unsolvable when this many Ultimates team up together!

*Please note that this document will focus primarily on describing Makoto, but everything will still apply to the other students as well. Thank you for your time!

Text that reads ‘Investigation Start' appears above Makoto with a synthesized beep. Makoto gives a determined nod before turning to face his opponent.

Kirby gains a mop of spiky brown hair, complete with the signature ahoge at the top.

Up Taunt: Makoto clutches his head as white noise words surround him. He shakes his head as if to clear his thoughts, and the words vanish.

Down Taunt: Makoto slips on a piece of paper and falls flat on his back, before quickly standing up. (This taunt is inspired by a scene from the DR3 anime where Junko hurls a wrench at him but it misses; it can even be used to avoid some attacks with the right timing!)

Side Taunt: Makoto pokes a spot on the ground with his foot and a MonoCoin pops out.

Truth Bullet: Makoto points in front of him and fires a red Truth Bullet in that direction. While they don’t inflict a great deal of damage, they have good knock-back and can pierce through multiple opponents. Truth bullets travel a fair distance before disappearing, and can be reflected. Makoto starts with 3 bullets available (seen next to his damage meter) and can carry a maximum of 6. He can reload Truth Bullets by using Concentration (see Down Special section).

Side note: Due to Kirby lacking the ability to use Concentration, Kirby’s Truth Bullets will automatically reload themselves every few seconds. He also has access to the Perjury skill with Shield-B.

Present: Presents are a signature part of the Danganronpa series, useful in Free Time Events to help improve your bond with your classmates. In Smash, this move sees Makoto toss out a present to hit opponents. He has access to many presents from the series, and each have different properties; they may inflict or heal various amounts of damage on contact depending on which present hits which opponent. Weight, knock-back and other effects differ among the presents. For example, Fox McCloud will appreciate a Red Scarf thrown his way, but a Moon Rock will send him flying. If an opponent likes their present, Makoto heals a bit of damage as well. Also, it goes without saying, but hitting an opponent with underwear will cause massive damage and leave them stunned. There are around 50 presents in total — you never know what you’re gonna get!

Usami: Usami The rabbit-like teacher helps give her students a boost by flying a short vertical distance, with Makoto hanging on below her. She leaves a short rainbow trail in her wake and disappears at the height of her flight. The angle of flight can also be slightly adjusted.

Concentration: While holding the button, Makoto moves into a thinking pose as he concentrates. In this stance, he will ‘reload’ 1 Truth Bullet every 2 seconds. It also has the added effect of negating energy projectiles that come in contact with him during this move (similar to Ness’ PSI Magnet, except Makoto does not heal damage from it).

Closing Argument: “The killer is… you!” Makoto points a finger towards the opponent. The words “Closing Argument” flash around Makoto to hit opponents; the one with the highest damage gets trapped in a cinematic finisher. The opponent is buffeted by comic book panels of the blackened committing devious deeds. Finally, a Truth Blade slashes through the comic panels and strikes the opponent before Makoto’s profile cuts-in from the side, saying a variation of “I’ll cut through your words!” The scene shatters like glass (emphasized by the word ‘Break!’) and returns to game play, launching the opponent away.

Perjury: Perjury was a mechanic introduced in Danganronpa V3, and involved turning Truth Bullets into Lie Bullets. In Smash, holding shield and pressing B will activate Perjury mode, indicated by a purple aura surrounding Makoto with his eyes changing colour to match. While in this mode, you will slowly take damage until you cancel it with Shield-B again. The Standard Special now fires purple Lie Bullets, which travel faster and deal more damage than the regular Truth Bullets. Hitting an opponent will also cause a continuous damage effect (similar to Joker’s Eiha move), and hitting the same opponent with multiple Lie Bullets will increase the speed and duration of this effect. Remember to cancel Perjury mode when not in use, or you’ll continue to take damage!

(Also, if a Truth Bullet or Lie Bullet is used to KO an opponent, a ‘V’ will flash over them along with the usual red lightning effect before they fly off the screen. This is based on the ‘V Counter’ effect from Danganronpa V3, and is purely cosmetic.) 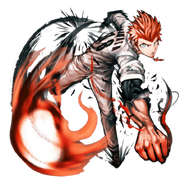 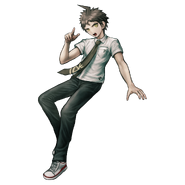 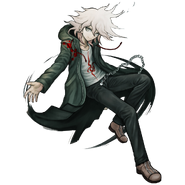 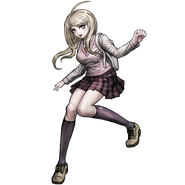 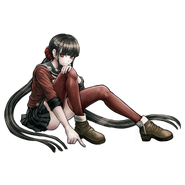 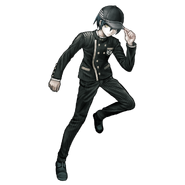 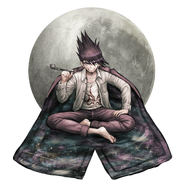 Click Here to read a vignette written by KellyJelly about Makoto (and friends) interacting with characters from Super Smash Bros.!

Community content is available under CC-BY-SA unless otherwise noted.
Advertisement