9-Volt is a young elementary school boy who just LOVES anything Nintendo. To him, Nintendo is the absolute greatest and nothing could ever top them. He attends Diamond City Elementary along with his best friend 18-Volt who he commonly invites over to play video games even though his mother 5-Volt wishes he’d go outside more often or play with his pet Fronk. His love of video games gained Wario’s attention and when Wario decided to form WarioWare, Inc. he recruited 9-Volt to help make micro games for him.

9-Volt will be sat playing an NES on the stage as everyone is coming in to fight then quickly throws the controller down as the console and tv disappears and he gets ready to fight.

Kirby will wear 9-Volt’s helmet on his head.

Up Taunt: 9-Volt will jump up and down pumping alternating fists with each jump in excitement.

Down Taunt: 9-Volt will pull out the Bongos accessory from Donkey Konga and start beating down a hard beat on them.

Side Taunt: 9-Volt will pull out two different Amiibo and pretend to make them fight each other in his hands as if he were actually playing Smash Bros and not participating in it. Each time this taunt is used the Amiibo in it may be different, but they do pull from the official line of Amiibo from Super Smash Bros.

Wii Zapper: 9-Volt will pull out the Wii Zapper with a Wii Remote and Nunchuck nestled inside the appropriate spaces. With his eye down the sight and the Wii Zapper held against his arm like one would an assault rifle, 9-Volt will carefully fire a compact blue ball of energy. This energy balls zooms across the stage until it hits an opponent and slams into them for damage. Alternatively you can hold down the attack button to fire a stream of smaller and shorter-ranged energy bullets however doing so will leave you open to attack as 9-Volt can’t move when using this special.

Controller Lasso: Swinging the controller of a classic Nintendo console (NES, SNES, N64, or Gamecube) above his head, 9-Volt will let loose the controller as it flies forward in the form of a lasso. This can be used to grab onto the ledges of different platforms and allow 9-Volt to pull himself up to them. Additionally if the lasso ensnares an opposing player it will wrap itself around them after which 9-Volt will give a great big tug on the rope and pull them within melee range of him opening them up to further assault. The controller lasso itself does minimal damage and there is no difference beyond aesthetics on which controller is used for the lasso.

Rumble Pak: A jetpack that’s designed in the style of an N64’s Rumble Pack will appear on 9-Volt’s back. Rumbling with vibration, the jetpack will lift 9-Volt up into the air slowly at first but quickly gaining speed the higher up it travels before the rumbling becomes too much for the jetpack and it falls to pieces sending 9-Volt falling back down below.

Virtual Boy: 9-Volt will quickly set up a Virtual Boy in front of him which after a brief moment will display a red & black monochromatic image in front of it. The image and what it does is randomized each time this move is used but there are three possible outcomes based on different games for the Virtual Boy. From Teleroboxer, a Telerobotic robot named Harry will appear and will perform a series of punches including jabs, hooks, and uppercuts in a melee range not moving from the place where it appeared. From Nester’s Funky Bowling, Nester himself will appear as he tosses forward a bowling ball. This bowling ball will travel along the floor of the platform for a short distance with the capability to damage and trip an opponent. If the bowling ball falls over an edge it can spike an opponent hit by it from above and can control rolling down the new platform until it reaches its maximum distance. From Mario’s Tennis, Donkey Kong Jr. will appear and will swing his tennis racket sending a tennis ball flying forward. This tennis ball deals minimal damage but it can briefly interrupt the actions of an opponent and ricochet off not just them, but platforms and obstacles as well for up to two ricochets before it disappears.

NES Remix: 9-Volt will take out the classic NES Zapper and fire it. This bullet carries a decent range as it can go all the way across Battlefield and when it hits something will create a small area of effect explosion with a NES style of graphic. An opponent hit by the NES Zapper’s bullet or the resulting explosion will then be pulled into a cinematic designed to look like the background of a standard NES game. At this point characters from various Nintendo NES games will appear and unleash a string of attacks against the trapped opponents. These characters appear as their NES designs and can include the original Donkey Kong, an Excitebiker, the Duck Hunt Dog, an Ice Hockey Player, Pit, Link, Mario, Samus, Mike Jones, Urban Champion, the Wild Gunman, and Starman. Additionally, the third party characters in this Smash title that had games on the NES can appear as well like Simon Belmont, Mega Man, Solid Snake, and Pac-Man.

Game Boy Camera: 9-Volt will pull out a Game Boy Color (purple of course) with a Game Boy Camera slotted into the game slot. With this 9-Volt will take a picture of what’s right in front of him and if an opponent is within melee range of him they will be briefly stunned and open to attack.

9-Volt has a Tether Recovery with his side special Controller Lasso. 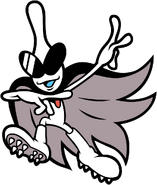 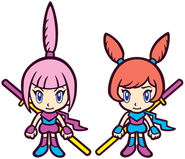 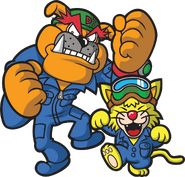 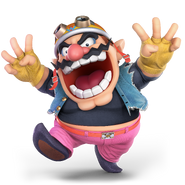